THE LIGHT SOARING ON THE EARTH

Esteve Casanoves designed an amphitheatre that was inaugurated with María Vera’s show “To the Marrow, the Olive Tree”, a combination of music, dance and poetry that created a feeling of love between the space and the spectators. It would be the preamble to “La Llum Planant Damunt la Terra”, Esteve Casanoves impressive sculpture of over 8 metres height, which presides over the vineyard, integrating iron, glass and light as they merge into the earth.

“Pretension of the aura of a day’s work at the vineyard, reflected in the night light and symbolised by two elements: the basket of the bearer and the claw of the grape”
“The magic produced by a sculpture whenever you see it converted from a three-dimensional sketch”

First Notes (of the Gardener Singing)

Esteve Casanoves together with Josepe Gil also created the installation “Primeres Notes (del Cant de l’Hortolà)”: a set of suspended sculptures, shadows and lights permanently exhibited since July 22, 2013 in the production room of the Mas Blanch i Jové winery, which was inaugurated along with Gregorio Iglesias’ work “Entre El Cel i la Terra”. 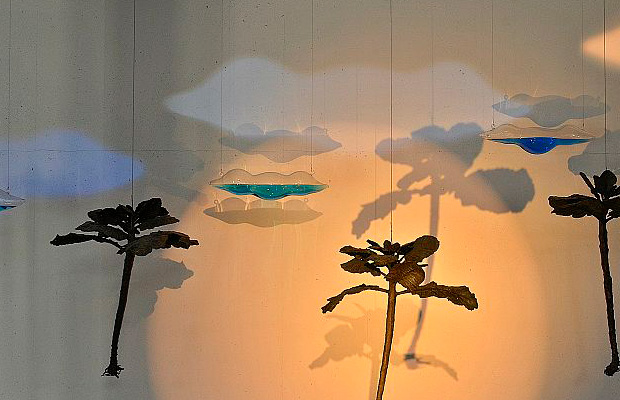 “In the void of the room, lights and shadows create matter; on the wall,
the glances project a landscape that hangs from time”

“To go across a territory that is familiar and dear to me with new eyes,
in fruitful dialogue with my friend Esteve Casanoves”

He has curated sculpture exhibitions both here, “Pesos específics”, and in France and has exhibited in numerous museums in various countries. Esteve Casanoves’ aesthetic project is always found at the crossing of different disciplines: he plans structures for painting; strange objects acquire subtle movements; he introduces photography in the construction of objects that produce a poetic and magical touch, playing with space. Every piece, however minimal it may seem, synthesises or recreates the maximum expression of his creative sense. Perhaps that’s why, as Dante says: “the work of art is what is visible, rather than something that cannot be seen.” In Casanoves we must capture the spirit –or the meaning– of his language, where everything is static, and nothing is in the same place twice. The work of Esteve Casanoves is based on light, its reflection, and on the limiting of the space that this creates.