Llena (1942), a pioneer in conceptual and povera art in Spain, defends, from the beginning of his career, the idea that the contemporary world is a fragile world where the great proclamations -political and aesthetic- have no consistency anymore. He announces that the market will cease to be an exchange, to become speculation and that information will become misinformation. A perspective that remains fully valid in the current context.

In fact, his work “Món” [“World”] consists of a stainless steel ribbon containing a fragment written in Catalan (translation Jem Cabanes) of a poem in German by Robert Walser: “From among the vagaries of the world arise, completely cofois, worlds that are very deep, that flee like vagabonds to other worlds that, they say, are of the most precious.They offer good and running, they offer good and fleeing, living is a migration for them, now, to me, I don’t care, because that way I can aspire to the world that is a simple world yet to be demolished”.

Walser’s writing evokes the idea that the world is always under construction: constantly being destroyed and built. In motion, in catharsis. Walser was one of the most important Swiss authors of the twentieth century, and whose literature delved into everyday life and the small details of life, with an innovative formal expression that influenced authors such as Frank Kafka, Susan Sontag, John Maxwell Coetzee or Elfriede Jelinek.

Already at the end of 2019 we were working with the artist to find the place in the vineyard where this piece could be installed. Antoni Llena was looking for an unique place. This space was the back of the Cabana del Guino, a small vaulted hut from the late nineteenth century and which Llena renamed La Barraqueta. A wild place, like a manger, perfect to stand, see the sky and read. His space, within the space of The Artists’ Vineyard.

In this place Llena’s work clings like a vine to the old walls of ruin. A hidden poem, like the one lived during childhood, that never dies and you always find it again and allows you to relive emotions hidden among the stones of memory.

The totally outdoor party featured the Free’t Collective show “Cuirasses i Nius” and a snack-dinner paired with wines from the winery and music by Bach.

“I looked for a place that would catch my eye. And I found La Barraqueta: a wild place, like a manger, the perfect place to stop, watch the sky and read. I knew it was my space within the space of The Artists’ Vineyard”

Opening. The Year 10 event at The Artists’ Vineyard. 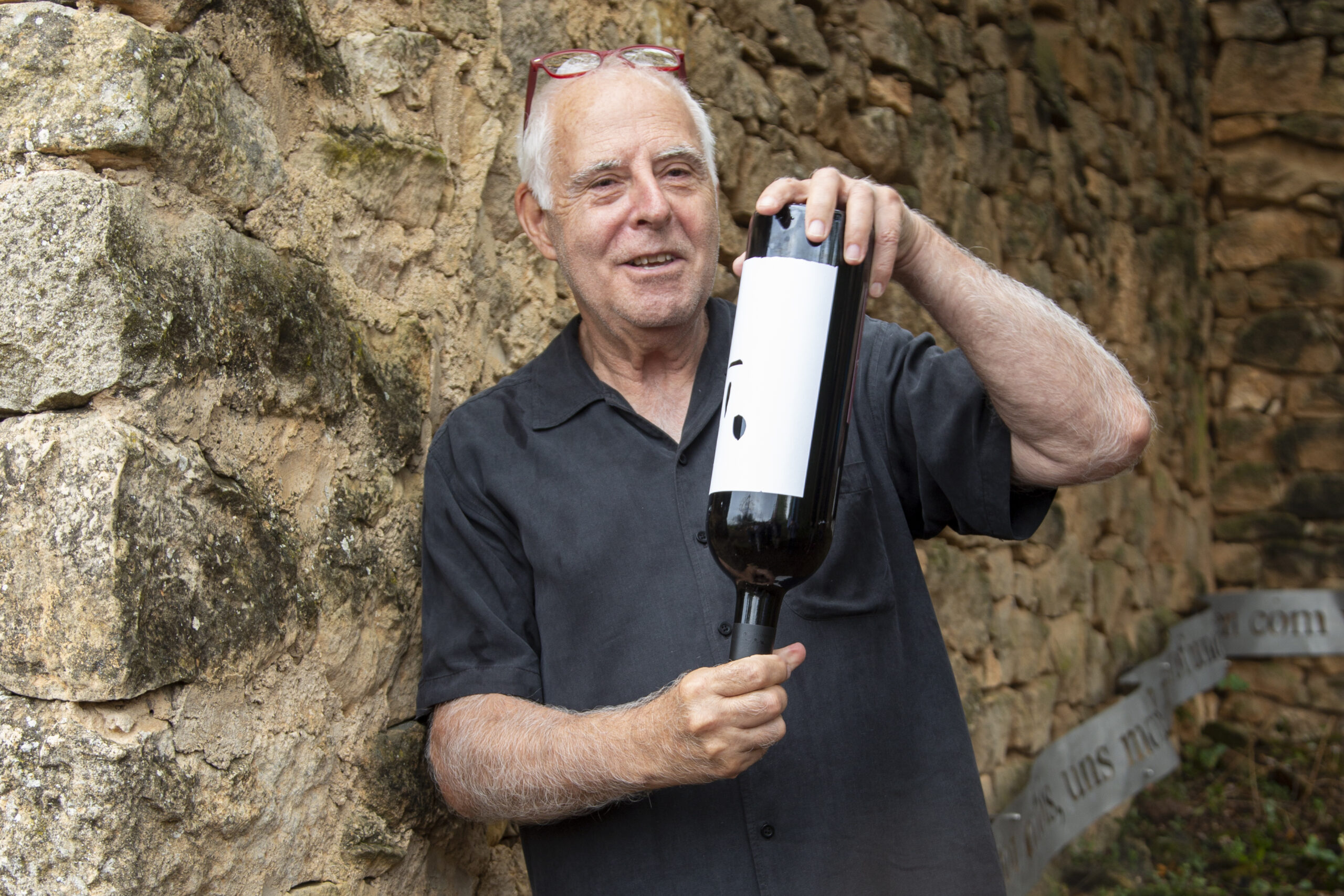 Antoni Llena Font (Barcelona, ​​1942) is a Catalan plastic artist. He is considered an innovator within the current art scene. His work, subtle and elegant, is a constant challenge to conventional forms and the limits of art. He has published several books and regularly collaborates with the written press, currently with the Diari Ara.

From the beginning of his career, he has taken sides with fragility. He is aware that the contemporary world is a fragile world, that the great proclamations – political and aesthetic – have ceased to have consistency. He began as a Capuchin friar until in 1966, when he met the painters Antoni Tàpies and Albert Ràfols-Casamada, with whom he began a solid and long friendship. Alexandre Cirici Pellicer bets publicly on his work. He came into contact with the group of painters formed by Jordi Galí, Sílvia Gubern, Àngel Jové and Albert Porta (Zush and Evru, later). They share artistic interests, although with aesthetic differences, and in 1969 he made Primera mort with them, the first artistic video in Spain.

His first individual exhibition takes place this year at the Petite Galerie in Lleida, where he exhibits, drawn on the wall of the room, the shadows of his paper sculptures. This is also a troubled year in his career. After making a large number of works – many of which have disappeared – he decides to renounce, due to poetic radicality, artistic practice. He will exercise it again ten years later, in 1979, uninterruptedly to date.

He has been a professor of artistic literature at the University of Girona and has directed art workshops for the School of Visual Arts in New York and also at the Eina school in Barcelona. He has curated the exhibition “Tàpies seen by Llena. The anxiety of the influences” for the Fundació Tàpies (1991). He also regularly collaborates in the written press and is the author of the books La gana de l’artista (1999) and Per l’ull de l’art (2008), and public artworks like David i Goliat (Barcelona, 1992) & Homenatge als castellers (Barcelona, 2011). MACBA keeps several of his pieces.

He has been recognized with the City of Barcelona Prize for Plastic Arts and the Espais Prize for Art Criticism.